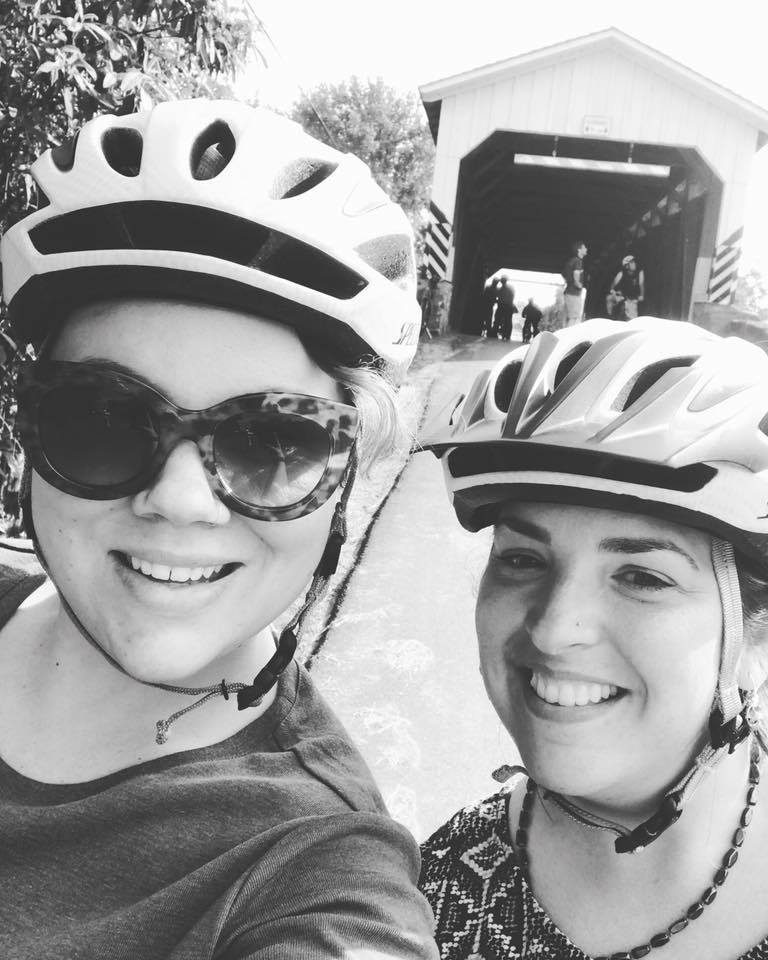 Melody on Tour: A Fresh Take on our Amish Dinner Bike Tour

This year, I decided that I was done being afraid. We’re told as women that we need to be quiet and small and blend in, but I am neither quiet nor small. My body is strong and big and my voice has exactly one volume level- football field loud. I’ll be honest and say that I think part of my trepidation about trying new things has to do with the very real fear of messing up in front of people who might be watching. But I have come to two conclusions over the last several months: 1) Nobody’s really watching. 2) Who cares if they are?

When Mark and Rebecca moved in down the hall from our new offices at Rock Lititz, I was intimidated by their tight muscles and their spandex, but not so much that I didn’t desperately want to see them succeed. Cause listen, as a small business owner myself— and also co-owning that business with my spouse— I get it. There is nothing so trying and scary and exhausting and gratifying as striking out and trying something as brave as opening your own company. Are we good enough? Do we know enough? Where does the money come from? What if we fail? Every single one of those thoughts runs through my brain on a daily basis, more than 10 years into this whole owning-a-business-nonsense. (My husband and I routinely look at each other and say, “Whose stupid idea was this anyway?!”) All that to say, as much as the bike shop felt like “not for someone like me”, I wanted to support them. I wanted them to know that they have people cheering them on, and believing in what they do.

ALL THAT LONG AND MUSHY BACK STORY (gross) TO SAY THAT I SIGNED UP FOR A BIKE TOUR. And listen, that was scary to me. Ok, I get that many people reading this are seasoned cyclists who roll out the century rides on the weekend and are all NBD about it (I know what a century ride is now, by the way, although I am not sure I used the terminology correctly). But as someone who nearly succumbed to heart failure on a 2-mile ride, this was new and I wasn’t sure if I could do it. However, at this point, I had spent some time talking to the Lititz Bikeworks gang and I was now firmly on the Rebecca/Mark/Rob team. I was doing this for them (but also and only because it involved food). Copious amounts of food glorious food. I signed up for the Amish Dinner tour in late spring. It is an 8-mile ride culminating in a home-cooked dinner by an Amish family in the area. Again, I disclaim: this felt scary to me. I know it probably doesn’t to you, but we don’t get to judge each other’s fears. So give me the benefit of the doubt and understand that I literally wasn’t sure if I could do this. Not only was potential failure on the table, potential failure in front of 10 other people was on the table. If I was going down, it was with a captive audience.

So it turns out that I am a bit of a drama queen (shocking, truly) and neither I, nor the various and sundry folks on the tour- of all ages and abilities- failed. Let me tell you a little about this tour, and a little about how I believe the culture that Mark and Rebecca have built around biking is a hugely valuable asset to our community. We started from the Intercourse shop, and loaded in to a comfortable van piloted by our trusty guide, Al. From the moment we first stepped into the shop, Al was welcoming and accommodating. He had water bottles ready for all of us, and bright, high-visibility helmets on the van seats, along with instructions on how to properly adjust them. (That sounds dumb maybe, but you don’t know what you don’t know.)

After about 15 minutes enjoying the pastoral views out the window, we pulled into a breathtaking, meticulously kept farm. Located in one of the barns was a fleet of beautiful new bikes, all of which Al custom fitted to our heights before we left. Recognizing that we were of all different fitness levels, Al jovially said, “Don’t worry too much about this big hill right out of the gate. We are going to walk our bikes up that hill and then get started from the top.” I, along with a few others, took this as a personal challenge and decided that damnit, ain’t no hill that I can’t conquer on my bike! (As an aside, I have subsequently found this to be categorically untrue, but I have also found that there ain’t no hill I can’t walk.) About halfway up the hill, I was enormously regretting my decision, but dagnabbit, there was no way I could stop now with all those people behind me. I weaved back and forth on my bike, like a hiker breaking a steep climb into less challenging switchbacks. I finally got to the top of the hill, where I had to put my head between my knees and try not to throw up. 60 million years later, I finally stopped sucking wind, and was able to proceed with my bike ride like a reasonable human being.

To say that the tour was lovely would be a gross underestimation. Al was careful to keep the speed at a manageable pace, and routinely paused for drinks of water and to point out various interesting features of the area— among them, a gorgeous park and a one-room Amish school house (and, at various times throughout the ride, piles of horse crap that we should try to avoid). I have lived in Lancaster County for almost 13 years, but he shared interesting tidbits with me that I never knew before. (For example, did you know that gray buggies belong to Amish people and the boxier, black buggies belong to Mennonites? I’m pretty much a wealth of information about this now. Ask me anything.) After that initial hill, the ride was completely manageable, with some gently rolling hills—but nothing treacherous. After looping back to the farm, we parked our bikes and loaded back into the van for a short ride over to Dave and Naomi’s house.

I’ll be honest, at first I felt a little exploitative, like I was a tourist gawking at this “backwards” way of life. (Which, I mean, I kind of was…) But from the moment that we pulled up, Dave and Naomi made us feel not like nosey tourists, but cherished friends. Their children were excited to show us several baby bunnies they had caught in the yard, and the aroma of lavender from Naomi’s garden wafted from the open windows and mingled with the smell of THE BEST FRESHLY BAKED BREAD I HAVE EVER TASTED IN MY WHOLE LIFE. I think I put like 6 cups of homemade butter on it and ate and ate until I felt a little light-headed. They could have just served me that, and I would have died a happy woman. But they didn’t stop with bread— there were mashed potatoes, and some kind of magically addicting salad (I think it had bacon in it, so that explains the addiction factor) and roast beef and cooked carrots and strawberry pie made with fruit from their garden, and locally made ice cream and freshly brewed coffee. As Dave got up to do the dishes (!!!), I was literally thanking God that we didn’t have to bike back to the shop. Because I am not exaggerating when I say that I couldn’t have done it. I would have sat my bread-endowed bottom on the curb and said, “GO ON WITHOUT ME. I CANNOT MOVE ANOTHER STEP. THIS IS WHERE IT ENDS FOR MELODY STRAYER.”

We visited with Dave and Naomi for a while, and they graciously showed us their finished basement, where they had set up rows and rows of handmade wooden benches to host their district’s church meeting the next morning. They answered our questions patiently and with a great amount of humor. At one point, someone commented on how tidy the house was, and without missing a beat, Naomi said, “I will let you in on a little secret.” She opened the door to a large storage room filled with all the miscellaneous odds and end that seem to multiply in our homes. “I just shove everything in here when guests come over.” (I am reasonably sure that Naomi and I were separated at birth, and also reasonably sure that Beverly Lewis wrote a book about it once. “Melody and Naomi: An Englisher Collides with Paradise”. Or you know, something like that.)

Two points that I want to make in closing, on the off chance that you are still reading. The first is that my interaction with Dave and Naomi completely changed my thinking about the Amish culture. Having lived in Lancaster for many years, I thought I had them figured out. But it turns out that I really didn’t know much. I think this has a lot of different applications, but my takeaway is that people who are different from us will continue to feel like an “other” until we sit down and break (lots of) bread with them. I read a quote somewhere that if we want to understand other people/culture/traditions/faiths, it’s as simple as eating dinner together and holding each other’s babies. I am grateful for the reminder that we have more similarities than we have differences.

Lastly, I think there is something unusual and precious in the biking community that Mark and Rebecca have fostered here in Lancaster County. There’s room for everyone at the (figurative and literal) table. They have space for the elite athletes who are coming in to blank blank blank blank blank blank blank (I don’t know?! Do I look like I know what an elite athlete does?). And they also have room for the brand new cyclist who isn’t sure she can bike the 2 miles to work. They have room (and gear) for the elderly woman who wants to go on the bike tour with her family but isn’t sure she can manage it (Pedego e-bike to the rescue!). They have room for everyone in between. I was talking to a friend recently about having a “growth mindset”. None of us are where we want to be… yet. We don’t know how to do that… yet. We aren’t good at that… yet. Mark and Rebecca have created a lot of space for both “now” and “yet” in their community stores, and provide both the tools and the cheerleading to get from one to the other. I’m happy to report that 8 mile bike rides no longer seem daunting to me, though I am no elite athlete… yet. Give me a few months and I might be coming in to Bikeworks to blank blank blank blank (still not sure what they do?! Ride really fast and look hot?!). But either way, I’m still coming back for the bread.

This was a great way to see the Amish countryside. Our guide Mark set us up with our bicycles and led us through the fields. Going up some of the hills was a challenge for me, but Mark kept an eye out and made sure I was okay. Dinner at the Amish Farm was a lovely experience. The family was…